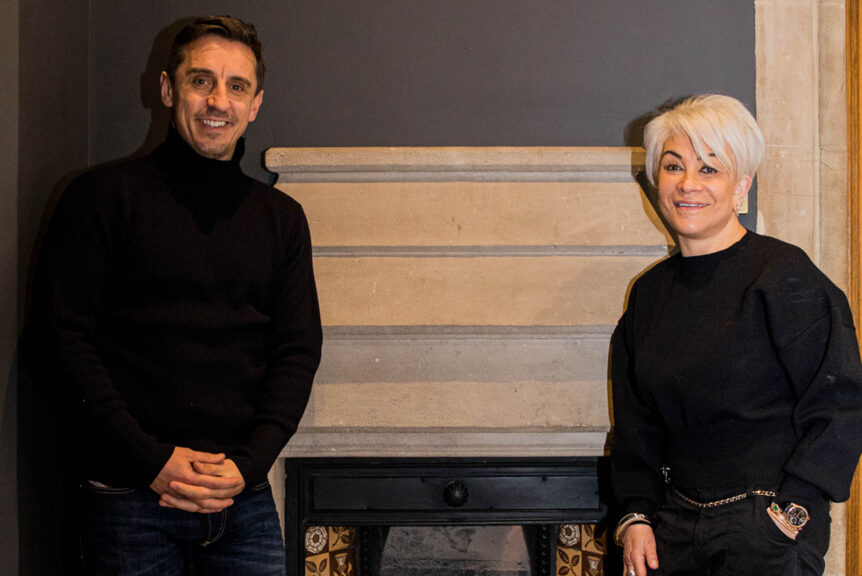 Ex-footballer turned business mogul Gary Neville shared his advice for entrepreneurs wishing to emulate his success, hailing the influence of role models such as the late Nobby Styles and football coach, Eric Harrison, as the reason for his achievements both on and off the pitch.

Neville spoke of his formative years at Manchester United during an interview with celebrity event planner, Liz Taylor. His conversation kicks off the third season of her Events That Made Me podcast, which puts the lives of celebrities under the spotlight and examines events that have shaped their lives.

“And I just saw determination in Roy Keane. Paul Ince, Eric Harrison…Sir Alex Ferguson, I saw people around me who were animals, absolute animals. They worked on a football pitch in the gym. Everything was like 110%. They would literally die for every single pass, every tackle, every header.

“And when you see that. You’ve got the level that you need to step to and go to. And that’s where I … was influenced by all of those people around me. And I became that person that I am today – through those influences from 16 to 20. We all did. All of us. All of us, young lads.” Click for audio clip

Neville also spoke of friends and former teammates Paul Scholes and David Beckham, describing how the stars also thrived under the influence of mentors who have shaped the men they have become.

“He [Scholes] was introvert who ate pies and had a pint before a game and Becks …was an unbelievably talented football player. Brilliant striker of a ball, great energy, but he wasn’t tough. You know, he was somebody who liked being with his parents … he moved away from home to come to the United.

“We all became the individuals… the mentors that you have .. whether it’s your parent, your teacher your boss…You’re going to follow that.”

Neville went on to explain that it was football, and the influence of his early role models, that gave him the skills to bounce back from setbacks he has faced in the business world. Recounting the ‘event that made him’ Neville said: “When I was 24, I had a really bad experience in football and for United fans who were listening or football fans, who may remember, I gave two nightmare goals away with pass backs against Vasco da Gama.

“We lost the tournament; we lost the competition, and I went under. I went under for eight months, complete loss of confidence, doubted myself, absolute shambles and needs to go and see a psychologist at the time to come out of it. But since that point …my mistake management or my recovery from major events that go against me, I think really is good. Because I put a lot of work in around that time.”

And it is this one event that Neville believes even gave him the toolkit to deal with failing as a football manager when he took the helm at Valencia.

“Or whether it be, say, for instance, Valencia. The minute I left Valencia, I was back on Sky within three months and no one would have known that I’d been a failed manager …. because I genuinely am able to compartmentalise things …. and move on straight away.” Click for audio clip

For the full interview, listen here https://podfollow.com/etmm-liz-taylor to Events That Made Me with Gary Neville from 9am on January 13, 2021.

And the 45-year-old Sky Sports pundit, who was renowned for his work ethic and determination to succeed on the football field, feels he also has a lot riding on the success of his business projects.

“The business side, I’ve got to deliver on it. If I don’t deliver on these businesses in the next three or four years, the last 15 years won’t count for anything. So, I feel like I’m in the .. finishing straight, if you like, of a race. Because I think 50 is the point whereby, I need to then think about what I’m going to do for that next 15 years. Click for audio clip

In summary, Neville’s advice for anyone starting out on a venture in life is: “Get up every single day work as hard as you possibly can. And don’t give up.”

Gary Neville is one of the most decorated English and European footballers of all time, having won a total of 20 trophies, including eight Premier League titles and two Champions League titles. He spent his entire playing career at Manchester United under the direction of the great Sir Alex Ferguson and served as club captain for five years. After his retirement he went on to become a successful commentator and football pundit on Sky Sports and has invested in and overseen a string of hospitality business ventures, mainly in his hometown of Manchester. He was instrumental in bringing Michelin Star chef Tom Kerridge to the city, an opportunity he capitalised on after a chance meeting with the chef at the Corinthia Hotel in London.