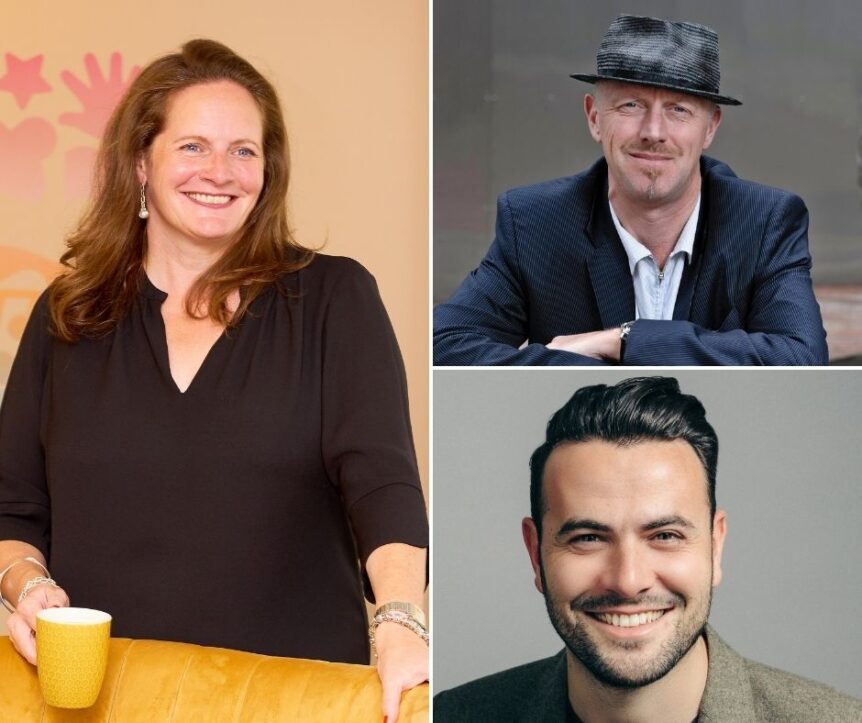 Three of the UK’s most successful entrepreneurs have shared their tips for success, along with mistakes to avoid when starting out in business. Speaking to host Liz Taylor on the Events That Made Me – The Entrepreneur Editpodcast, leading entrepreneurs Jennie Johnson MBE, founder of Kids Allowed and My First Five Years, alongside Urban Splash CEO and founder, Tom Bloxham MBE and Ben Winston, a founding partner in Fulwell 73 Productions and the man recently named one of the most influential TV producers on the planet, each shared their five top tips for business start-ups.

The top piece of advice shared by all the entrepreneurs is adapted from Nike. And that’s ‘Just Do It.’ It can be overwhelming when first setting up a business, but the truth of the matter is that even the most successful entrepreneurs had to start somewhere. And everyone can feel out of their depth when they first set out. Often there is an element of fear too, but one way to combat that is to work out the worst-case scenario and then decide if you can cope with that. If you can, then what are you waiting for?

In property entrepreneur Tom Bloxham’s words: “My first piece of advice is stolen from Nike, which is ‘just do it!”

“The worst thing that could happen is actually you go bankrupt. And if so, you will learn more in that, than you will in three years of business school. Most people will leave it too late.  By the time they are thinking of doing it, they’ve got a good job, a good salary, mortgages to pay, school fees… so, particularly if you’re young and you’ve got an idea, just do it.”

Very often when they start their own business, people want it to be perfect, but it’s that pursuit of perfection that can hold them back. Sometimes it can stop people setting up the business altogether. Early years entrepreneur Jenny Johnson coins this ‘perfection paralysis’ and she shared the following advice on how to avoid it.

“I’m very much a jump in with both feet, girl. I think so many people have perfection paralysis … they overthink, and they talk themselves out of it and they never do the thing that they’ve got within them. There is never a good time to do anything. So, if you’ve got to wait for that perfect moment, it isn’t going to happen.”

Not everything in business is going to work out just how you want it. The end goal should always remain your focus but how you get there can be fluid. There will be setbacks and things that don’t work out along the way.  It’s just part of life in business.  But what you need to decide is what are the things you’re not willing to settle on. What are your ‘non-negotiables’?

For Jennie Johnson it was that she wanted every child to have unlimited access to the outdoors all day, and that meant she needed purpose-built nurseries. She didn’t have the capital to construct multi-million-pound buildings, so she had to find an alternative route, which she did by engaging in deals with property developers.

There’s always an element of risk in business and the most successful businesspeople are happy to take a certain amount of calculated risk. You may have heard entrepreneurs talking about following their ‘gut feeling’, even when it takes them in an unfamiliar direction. Certainly, many start out by taking a path that isn’t immediately obvious, like international TV producer Ben Winston. On the Events That Made Me podcast Ben, the man behind James Cordon’sLate, Late Show and most recently the person responsible for bringing the Friends back together, discussed his very first job offers, and how he took a seemingly less-attractive role that led him on to great things.

“I had two offers. The first offer was working for a football agent. Being paid £300 a week, but this football agent looked after all of Arsenal. I was very excited to get this job offer because I’m an Arsenal obsessive.

“The other job offer was in television, and it was a two-week work experience, job, unpaid as a runner. I followed my instinct and took the job as a runner, but then before long I was an assistant director. And by the third season I was directing, producing, and filming. That job rapidly elevated my career. It without question led to everything that has followed since.”

Play to your strengths

There will be a time in business, especially at the beginning, where there’s an element of having to ‘muck in’. Company directors sweeping the floors and answering phone calls isn’t unusual in the early days, but the most successful people realise they can’t be good at everything. They fill the skills gaps with talented individuals who will complement their own skillset.

Jennie Johnson said: “I very quickly realised that I didn’t have everything I needed to make this happen. I am not a details person. I never have been. I can have the ideas, the passion, the vision.  Don’t get me wrong. I pay attention to the important stuff, but I’m not going to be the one that’s going to sit there and write a financial forecast and a plan.  I knew I needed somebody that was the details person to be the other half of the idea.’

Tom Bloxham added: “Realise what you’re good at. Realise what you’re not good at. Fill the jobs. Be generous with people you get. Either pay them well if you can afford to. If you can’t, give them a profit share and some equity. Give them something else to help make it a team.”

All three business minds were speaking on the Events That Made Me – The Entrepreneurs Edit with leading event planner, Liz Taylor. Listen to the all three interviews here https://podfollow.com/etmm-liz-taylor from 10am on Thursday, December 9, 2021.

Over the past thirty years of organising high-profile celebrity events Liz Taylor has moved in some exciting circles and in 2020 she opened her little black book of contacts to help her realise a burning ambition in launching her own podcast. Gok Wan, Howard Donald, Lisa Riley, Sally Lindsay, Eamonn Holmes, Antony Cotton, Christopher Biggins, Katie McGlynn, and Linda Plant were just some of the celebrity and business guests to share the highs and lows of their road to stardom in the first seasons of her Events That Made Me podcast, which received 4.9-star ratings is still available here: https://www.liz-taylor-consulting.co.uk/