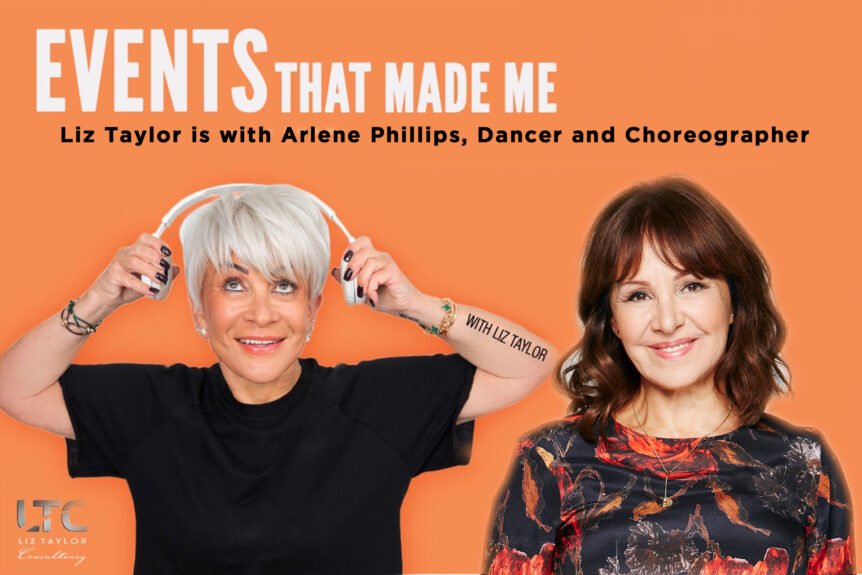 Manchester born Arlene Phillips CBE may have started out her dancing career as a live-in house sitter for Ridley Scott, worked on Hollywood movies with some of the biggest stars of the stage and screen, and choreographed some of the world’s most famous musicals, but life in the public eye hasn’t always been a smooth ride. From paying for her early training by working in a bakery, to finding out she was pregnant just as she was on the cusp of breaking America and then again at the age of 47, to losing her job on Strictly in a very public manner, the 77-year-old star revealed the ups and downs of her career in an open interview with celebrity event planner and brand consultant Liz Taylor, on her Events That Made Me podcast.

Arlene began by talking of how she overcame financial and emotional adversity in the very infancy of her career, including that of losing her mother at a young age. Recounting the story, she said:

“I’d always loved to dance, and I came from a family that really couldn’t afford to send me to dance lessons, but I absolutely was determined somehow I was going to dance. I managed with the help of my uncles and working in a bakery shop and paper rounds. I managed to get myself to dance classes. And at the age of 15, when I had high hopes of going to London and joining into one of the famous ballet schools there, my mother passed away. I had an older brother, 17, and a younger sister who was just about turned 13, and I knew that I just couldn’t leave my father and the family.”

Arlene won a scholarship to attend a dance school in her hometown of Manchester and studied there until the age of 22. Her dream started to become a reality when one of her teachers asked her to attend a dance school in London to learn and bring back the inspiration. Arlene impressed the teachers in the capital so much, that she was offered a scholarship and surprisingly the chance to work for none other than Ridley Scott as a live-in house sitter.

Arlene continued: “I thought, ‘this is an opportunity of a lifetime, but if I go home, I will never be able to leave’….it took all the courage to call my family and say, I wasn’t coming home. That was it. I stayed, I took the jobs, I studied, and I was in London.”

She went on to excel and eventually teach at the dance school and formed the group Hot Gossip by bringing together some of her best students. They put on shows that were ground-breaking and pushed boundaries in terms of style and attitude. Again, her resourcefulness and willingness to succeed was demonstrated in how she managed the group to success on a very low budget. Arlene said:

“It was sexy because we didn’t have a lot of money and lingerie was cheap to buy and I could dye it lots of different colours. So, they were in different costumes. One of the boys in the group, worked in a sex shop and he was given all of these amazing costumes.”

The group was labelled ‘too sexy for television’ by many directors and producers at the time and was even condemned as an ‘outrage’ by Mary Whitehouse, the self-proclaimed ‘protector of public image’. But thanks to Arlene’s tenacity, they did eventually break through and went on to become a huge hit.

The full interview can be heard from Wednesday, March 10, 2021 on Spotify, apple podcasts of by visiting: podfollow.com/etmm-liz-taylor

Further on in her career and a fact not hugely publicised, Arlene had not one but two surprise pregnancies, which happened almost a decade apart from one another. The first was just after she had signed her first Hollywood contract. She explained:

“I had the contract, the contract was signed, and I was heading to LA, but the baby was going to be born in September. I wanted the baby. I wanted the film…I was so afraid to be wanting to do both… I spoke to the director Alan Carr. I called him up on the phone and he said, to my surprise. ‘Sure. Whatever you need. Yes.’

“I thought it was the menopause. I had no idea I was pregnant. I really didn’t think you could get pregnant at 47… So, no clue that I was pregnant until I was almost four months. And I realized, you know, my body was changing. I was tired and I never get tired. And then my beautiful, wonderful, late baby Abby was born and she’s yeah, she’s just my sweetheart.”

During the interview Arlene also revealed the deep regret she feels at not taking a stand about not speaking out about her Strictly exit at the time. At the time Arlene had just lost her agent and good friend Michael Summerton to cancer and was reeling from the shock when she heard about the loss of her job through a phone call from Radio Five Live:

“I felt I did not make the stand or demand clarity in the way that I should have done. I just tried to survive. Now I look back, I wish that I had taken control over what happened for myself instead of just allowing it to rattle on….I always felt guilty that I should feel grief at losing a job when I’d lost someone I loved. So, I tried to go, ‘it doesn’t matter. But it does matter.”

Arlene Phillips CBE rose to fame in 1970s as the manager and choreographer of dance group Hot Gossip. She became one of the UK’s most revered choreographers working on everything from West End musicals and music videos to feature films, with credits including The Wizard of Oz, Starlight Express, Flash Dance, We Will Rock You, Grease, Night Fever, Annie and Can’t Stop the Music. On the small screen she is best known for her work as a judge and mentor, first on Strictly Come Dancing and latterly on Over the Rainbow and So You Think You Can Dance.

Since its launch, the ‘Events That Made Me’ Podcast has featured in the top 10 of the Apple Business Podcast charts, with nearly 15,000 downloads and has doubled its listeners in under a year. With series four in the pipeline, the podcast has become a regular fixture for entertainment, arts and business playlists.